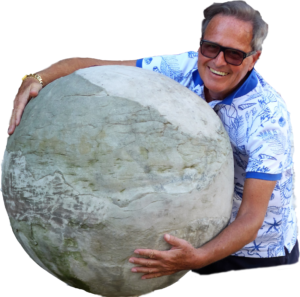 Frank Glanz was born in 1949 in Salzburg. After finishing school he lived in Switzerland, Germany and the USA. The time in New York and above all, Basel and the ideas of anthrosophy
were formative for him.
After his years abroad he returned to study. He finished his diploma as interior designer. The creative process in his job as designer, working with shapes and colours, lead him to take up painting.
His first autodidactic pictures won recognition by the great master of the“pittura metaphisica“, Georgio de Chirico and were awarded the „premio nationale per l árte ed il lavoro“ by the jury of the Academia di Roma in 1977.
In the years after Frank Glanz worked as an interior designer. While earning his bread and butter with great commitment he acquired his uncompromising and independent way of thinking.
Many journeys to Asian countries were made as a „Buddhist learner. If you look closely at his pictures, you can clearly see the influence of his experiences.
Frank Glanz tries to balance fate and coincidence, floating like a leaf on the waters of life. His painting reflects his inner and outward journey of personal experiences.
His lavish, glazed oil paintings in the style of past masters take a long time to be created and seem to contrast the speed of our time. The meditative way of painting reveals itself through peace and quiet, the same way as a secret only reveals itself step by step.
The meaning is coded, the pictures speak a language of symbols and art without being too psychological. The paintings are fascinating, not only because of their perfect technique, in the tradition of the classical panel painting, but also because of their bold use of colours .
The philosophy behind the pictures urges the viewer to get involved, to find his way into them, to look behind them.They are of current interest and modern. Frank Glanz uses his past-master’s technique in a playful way. Last, but not least, there are the antique frames that are chosen on purpose.
Collectors and lovers of his works of art are spread all over the world. Frank Glanz regards this fact as a spiritual-transcendal network:“art, and specifically the individual piece of art, has to act from soul to soul, from heart to heart. This is the way to get direct access and real understanding.
:Awards:
1977 Award of the Academy of Rome“velco dòro“in San Carlo,Naples
1984 Honorary exhibition Hans Markant- Frank Glanz in Rheins Musee de Malreaux
1991 Award of the „fondation pur la paix“
1992 Illustration of the book“eve and adam“ for windswept house publishers“ Mount Desert, Maine
1993 cover of the magazine“Die Bunte“ „Pleasure-market of dreams“
1993 contract-work of art – 40 years of UNICEF-Germany, UNICEF-gala Hilden
2006 exhibition „velca!dòro“, EU Parliament, Brussels
2010 art exhibition Tierenberg,Traun
2013 City-hall gallery-Sonthofen
2014 City-hall gallery-Gothic hall, Burghausen
2015 Invitation by UNICEF :international art-hearts (for Austria)